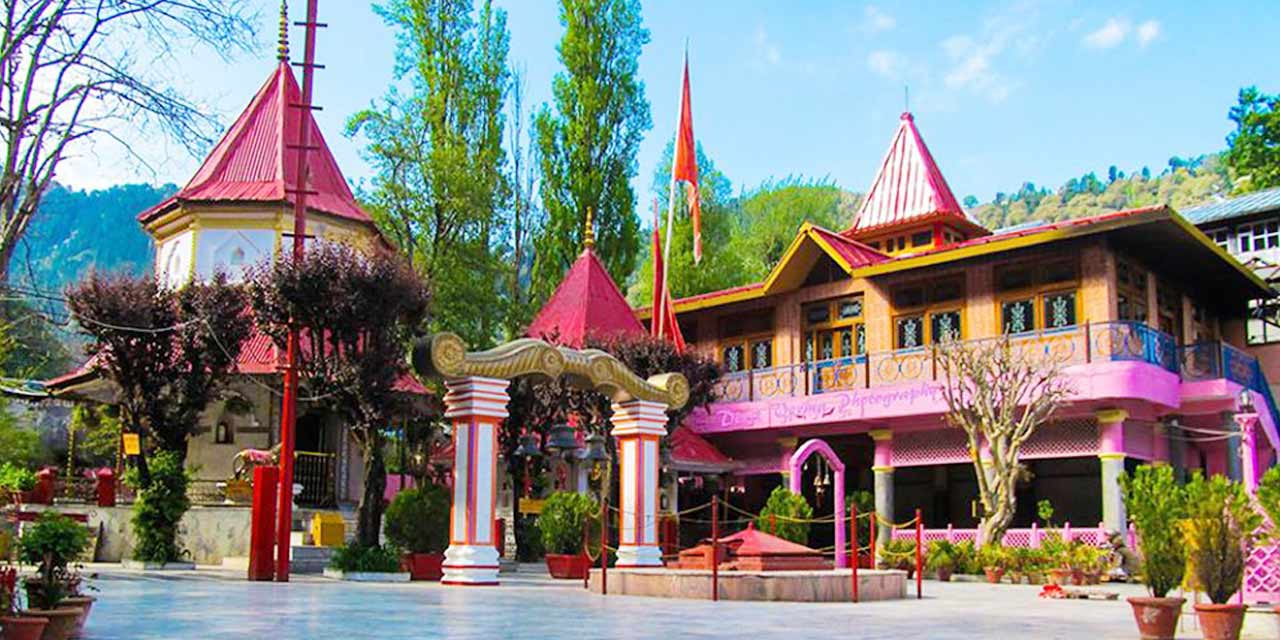 Naina Devi Temple Nainital Aarti Timings: 7:00 am in the Morning and 7:00 pm in the Evening

Standing on one side of the beautiful Naini Lake is the Naina Devi Temple, which is a famous Indian pilgrimage and one of the 51 Shaktipeeths in India. Located on the banks of the lake, it is a beautiful tourist destination as well.

The Naina Devi temple gets its name from the mythological legend that Goddess Sati’s eyes (Nayan) fell at this place when Lord Vishnu cuts her body into 51 different parts. In fact, the whole town (Nainital), the lake (Naini Lake) and the Naini temple, all three of them are named after the legend.

The Naina Devi temple is considered as one of the most sacred temples in the country showering blessings on devotees from across the world. The great Shivalik range of Himalayas surround the town and the temple is guarded by the highest peak Mt. Nanda Devi which is believed to be the sister of goddess Naina Devi. Nainital Tour Packages, offered by HolidaysDNA makes your visit to this holy temple all the more alluring.

Within the premises of the temple stands high an old Peepal tree guarding the temple and providing shelter to the pilgrims. As you walk inside, there stands Lord Hanuman showering blessings and guarding the goddess.

As you move towards the womb of the temple, in the center are two Nayan (eyes) representing Naina Devi, Mata Kali to the left and Lord Ganesha to the right. Two lion statues which represent the vehicle, called ‘Vaahan’ of the Goddess, guard the inner shrine.

The temple is erected at the place where Goddess Sati's eyes fell while Lord Shiva was carrying her corpse after being cut into 51 different parts by Lord Vishnu. The story goes back to the times of a great king Daksha Prajapati to whom was born a beautiful girl, Sati. As time passed by and Sati grew into a beautiful lady, Daksh started looking for an appropriate match for her.

Meanwhile, Sati fell in love with Lord Shiva whom Daksha never approved of. Nonetheless, Sati went ahead and married Lord Shiva. During the course of transitioning into a married couple, Goddess Sati and Lord Shiva came to know about a Yajna ceremony held by her father Daksha. The Yajna included sacrificing something in the holy fire.

To Sati’s disappointment, Daksha did not invite her and her husband to the ritual. Being a daughter, Sati still went to the Yagna ceremony but angry Daksha insulted the couple. Goddess Sati could not bear the disrespect and jumped in the Yajna fire sacrificing herself.

Lord Shiva could not bear the loss of her beloved wife and started performing God's dance of destruction, Tandava. Even after several pleas and trials from Gods, Lord Shiva did not stop. Sensing the gravity of the matter, Lord Vishnu decided to use his ‘Brahmastra', the 'Sudarshan Chakra' and cut Sati's burnt body in 51 pieces.

These 51 body parts of her fell at different places where the Shaktipeeths are erected. The Naina Devi temple is symbolic of Sati's eyes as it is believed that this is where her eyes fell. This is why in the main shrine the goddess is worshipped in the form of eyes.

One of the most popular sightseeing places in Nainital, Naina Devi temple finds its mention in the 15th Century (AD) or the Kushan period. It is believed that the idol was instituted in 1842 by a worshiper, Moti Ram Shah, but got destroyed during the landslides in the year 1880. The temple was rebuilt in the year 1883 with deep faith and as a tribute to the goddess. Since then the locals believe that the goddess has guarded them against any kind of calamities.

During the months of August and September falls Nanda Ashtami which is celebrated across the Kumaon region. The festival marks the celebration and worship of Nanda Devi, which is the highest peak of western Himalayas.

The sacred flower ‘Brahmakamal’ is worshipped and harvested during this time which marks the sustainable coexistence between men and nature. The flower holds multiple uses as a fuel, medicine, fodder and food while its beauty makes it ornamental as well.

During the time of Nanda Ashtami, devotees come and take blessings of the goddess. An eight -day long festival is organized in the temple premises. On the 8th day, ‘Visarjan’ or immersion of idols of Goddess Nanda Devi and Naina Devi is performed.

The temple also witnesses huge footfall during the months of Navratri and Chaitra as devotees come to worship the Goddess and take blessings.

The temple is located at the Northern end of the Naini Lake in the Mallital area.

Roadways- It is located at a distance of 3 km from the Nainital city bus stand. You can easily walk to the temple or hire a local rickshaw or auto rickshaw.

Airways- The temple is located 55 km away from the Pantnagar Airport. Once off the flight, you can hire a local taxi cab to reach the temple.

For a relaxed trip to the famous temple and other attractions in and around Nainital , you can board onto one of the cabs provided by top car rentals in Nainital.

Things to do / Sightseeing at and around Naina Devi temple, Nainital

Boat Ride- Naina Devi temple is located on the banks of Naini lake which adds to the beauty of the temple. It also gives visitors a great opportunity to take a boat ride. There are various boat rides available at the Naini lake.

Shopping- Once you are out of the temple, you can walk to the Nainital mall road and shop from the various collections by the local artisans. Nainital is famous for candles, look out for a variety of designs and aromas.

Tourist attractions nearby- The temple is surrounded by various hilltops which serve as excellent tourist spots. You can go to Tiffin Top which is 1 km away, Naina Peak which is 3 km away, and the Snow View Point which is 3 km away from the central city.

Another famous tourist spot around the are is the Eco Cave Garden which is a perfect combination of nature and human efforts. There are caves in the shape of animals depicting the natural Kumaon wildlife habitat.

If you are a bird lover, the Pangot and Kilbury Bird Sanctuary is a heaven for you. Get soaked in the astounding beauty of the place and ever charming birds.

Things to keep in mind