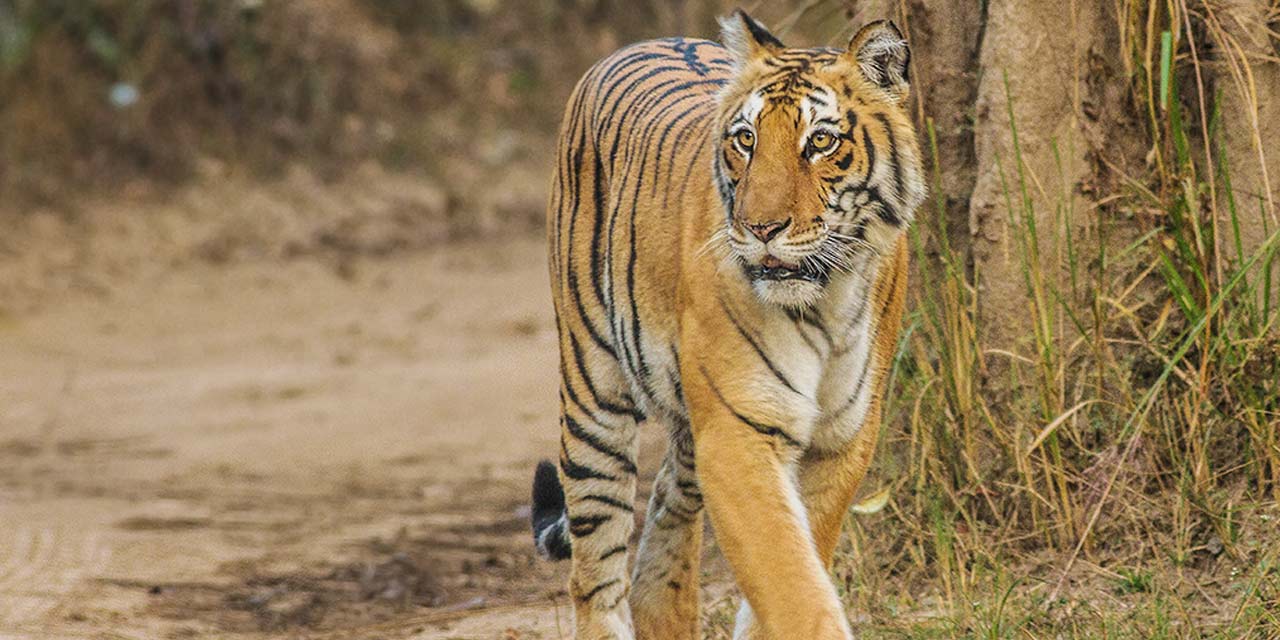 Embraced within the majestic Jim Corbett National Park and adjacent to the grandiose Rajaji National park is the Sonanadi Wildlife Sanctuary. The sanctuary got its name from the Sonanadi River which flows in this area literally meaning river of gold due to once held gold panning activities at this river. Later on, the area was converted into a sanctuary and comes under the Project Tiger run in India.

Spread over a huge area of 301.18 square kilometers, the sanctuary is loaded with dense forests in the Terai Biotic province of Shiwaliks. Bamboo trees, Sheesham, Bakli, Aonla, Kanthber, Jamun, Semal, figs and Sal form the major flora of the forests here. Two rivers Mandal and Palain enrich this area with desired minerals and nourish the aquatic life here. Sonanadi Wildlife Sanctuary is a famous tourist destination under the Nainital Tourism and should be on your must-visit places here.

A perfect spot for people seeking nature’s embrace and nirvana with the chirping of birds and a feeling of coexistence with the wildlife. Founded on January 9th, 1987, the Sonanadi Wildlife Sanctuary is essentially linked to the ‘Project Tiger’ which was initiated in the year 1973. On a combined level, the second-largest panther and tiger population in the world is found in Sonanadi Wildlife Sanctuary and Jim Corbett National Park.

Fauna at the Sonanadi Wildlife Sanctuary

The wetlands of the sanctuary serve as the adobe for rare animals like Asiatic Elephants, Tigers, Barking Deer, Sambhar, Cheetal, Wild Bear and several Reptiles. The sanctuary also flourishes with avian fauna housing almost 600 birds with a mix of both resident and migratory birds. The migratory birds fly to this sanctuary looking for a cozy winter home as their original adobe gets colder through the winters.

The flora of the sanctuary includes some of the rarest medicinal herbs found in the country and few species of shrubs which have been declared endangered.

In order to be able to experience the diversity and beauty this place beholds, there is a provision for jeep safaris for tourists. As thrilling as it is, it lets you peek into the natural habitat of animals and birds here. Tiger spotting is one of the most famous activities here but be sure of your safety first.

There are different timings for summers and winters at the sanctuary.

The best months to visit the Sonanadi Wildlife Sanctuary is between November to February as by then the majestic Asiatic Elephant migrates to this place to enjoy the monsoon.

To enjoy a cozy and nostalgic stay at the sanctuary you can book the various rest houses within the sanctuary which are available at Rathuadhab, Lohachaur and Halduparao. We also have a curated list of companies which take care of accommodation and logistics for travellers to enjoy a warm and memorable vacation.

Corbett Museum is one of the most visited tourist destinations around this area. It houses the collections of famous hunter and naturalist Jim Corbett during his stay here. The Corbett Museum is at the Dhangadi Gate.

Corbett Falls is another highly frequented destination, 28 km away from the Sonanadi Wildlife Sanctuary.

Garjiya Devi is the regional goddess in the area and the temple is quite picturesque. Situated at an elevation connected by long stairs at the banks of river Kosi, Garjiya Devi temple is a must visit just 15 km away.

How to Reach Sonanadi Wildlife Sanctuary

The Sonanadi Wildlife Sanctuary is located within the Jim Corbett National Park and due to its huge area can be accessed from various entries like Kalagarh, Vatanvasa Gate, Durgadevi Gate and Kotdwar.

Reaching Jim Corbett National Park is quite easy as it is well connected by national highways and other motorable roads.

By Air: If you are an air traveler, Pantnagar airport is the nearest one, about 80 km away from the Jim Corbett National Park. A lot of taxis operate to and fro from the airport to the national park. There are frequent daily flights from Delhi to Pantnagar for further connectivity.

By Rail: If you are traveling by train, Ramnagar is the nearest railway station just 5 km away from the Jim Corbett National Park. Ramnagar railway station is well connected by motorable roads to major cities in India and Uttarakhand. Ramnagar being one of the endpoints of trains entering Nainital is frequented by a lot of trains from the rest of the country. You can reach the Jim Corbett National Park from Railway Station by hiring a private taxi or auto-rickshaw.

By Road: Jim Corbett National Park is a famous tourist destination among Indian as well as foreign travelers. The national park is well connected by motorable roads with major cities in India. There are a lot of taxis available from major cities to Nainital and Jim Corbett National Park. Also, a lot of luxury buses commute from Delhi to Ramnagar. You can hire these buses from ISBT Anand Vihar, New Delhi.

For your Nainital trip, you can book a private cab from top car rental companies in Nainital and visit all the popular sightseeing places of Nainital and other popular tourist attractions around in a hassle free manner.

To make the most of your holiday, we at Nainital Tourism, a division of Holidays DNA have curated Nainital Tour packages that you can choose from depending on your budget and preferences. To know more about the various packages, please fill the Contact Us form and we will get back to you.