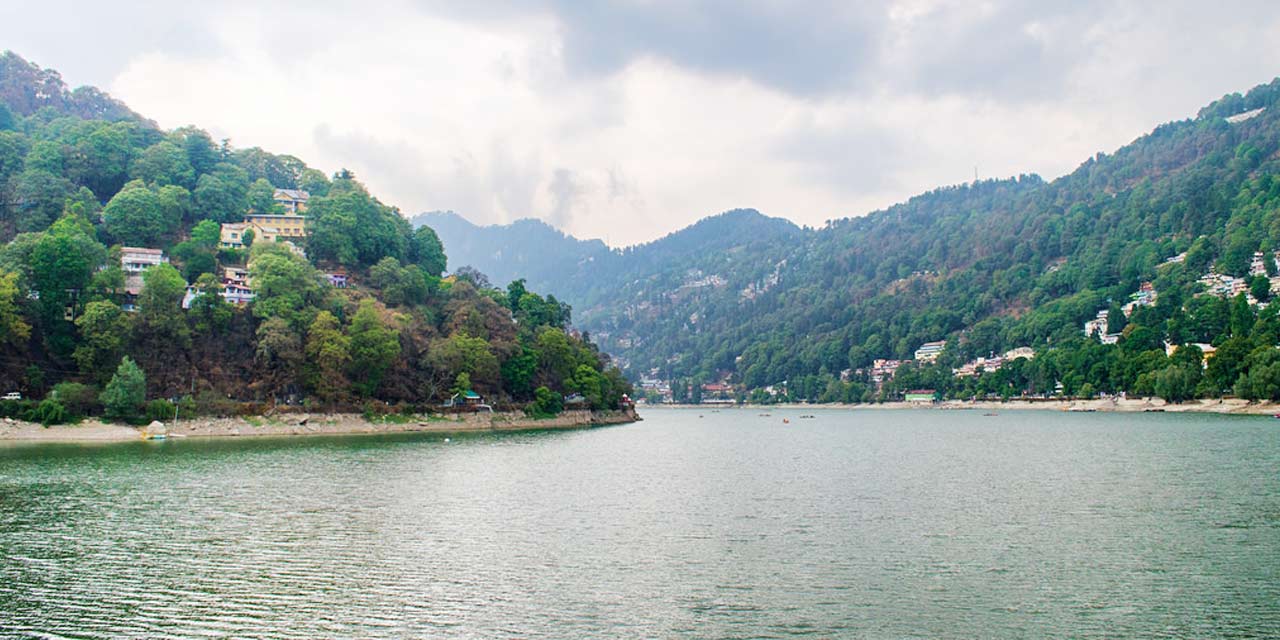 Ever dreamt of an almost infinite water body surrounded by lush green mountains, pleasantly chilly breeze, chirping birds, colorful boats, mixed flora and orange-colored common carp fish looking at you from beneath the water? You must have been standing at the Naini Lake in your dream.

Snuggled amidst the beautiful Kumaon town of Nainital, the Naini lake is nothing less than fresh out of dreams. The crescent-shaped freshwater lake is a popular tourist destination throughout the year. The lake is surrounded by snowy peaks at the north, Tiffin point at the south-west and Naini peak (after which the town and the lake are named) at the North-west.

The destination is an all time favorite for families, friends, honeymooners and among those on one-day tours. It offers you a splendid experience of enjoying its beauty while having a stroll across its boundary, boating in the shimmering waters, and quacking with the joyous ducks.

The lake is so big that it has been divided into two segments- Tallital and Mallital. The upper segment is called Mallital and the lower one is called Tallital. The lake is surrounded by seven colossal peaks namely, Laria Kanta, Sher ka Danda, Cheena Peak, Handi Bandi, Aryapata and Deopata. The lake boasts of a mixed flora which comprises of Coniferous trees, Oak trees, and the famous Bicchu Booti plant of Nainital (Kumaon).

The local legend is about an extremely powerful king Daksha who was the father of a beautiful girl Sati. As the time passed by and Sati reached marriageable age, Daksha started looking for a suitable match for her. Meanwhile Sati fell in love with Lord Shiva whom Daksh did not approve of. Nonetheless, Sati and Shiva got married and started their married life.

Angry Daksha organized a Yajna which included a ritual of sacrificing something specific in the fire but he did not invite Sati and Shiva. Disappointed yet in her Father’s love, Sati went to attend the ritual. Daksha’s agony had not subsided and he disrespected the couple. Sati, a devoted wife could not bear the insult and jumped into the sacrificial Yajna fire.

The news was beyond the bearing for Shiva and the enraged husband started performing ‘Tandava’, the celestial dance of destruction. A portion of Tandava was performed at the Naini lake as well. Amid the constant pleas by other Gods for Shiva to stop, Lord Vishnu decided to use his Sudarshan Chakra on Sati’s dead body and cut it into 51 parts which fell at different locations across the country. There is a temple erected at each such location. The Naini Devi temple in Nainital is where Sati’s eye or ‘Nayan’ fell and hence the name.

Another historical significance related to the Naini lake is the mention of a water body in the Hindu Scripture ‘Skanda Purana' which is named as ‘Tririshi Sarovar’ or lake of three saints. This water body is believed to be the Naini Lake.

Also, the town of Nainital, to a great extent, exhibits similarity to the European colonies. This is so because a European Businessman, P. Barron accidentally discovered Nainital during his hunting expedition. Mesmerized by its beauty and charm, he decided to build a European-like township around the lake which would serve as an alluring summer escape.

Things to do at and around Naini Lake Nainital

There is no entry fee for the Naini Lake, however, there is a Rs. 100 toll on entering the Nainital District. The boating is chargeable with different rates for different boats. The boats are charged at Rs. 160 for rowboat- half round, Rs. 210 for rowboat full round and Rs. 210 for Paddle boat per hour. There is also a Gondola Ride available across the lake which is Rs. 210 per head.

The months of March, April, May and June starting are best to see the lake’s flora in full bloom and also the perfect time to enjoy a boat ride. Months of November and December are also popular with tourists who want to enjoy fresh snowfall and chilly weather.

How to reach Naini Lake Nainital

Naini Lake lies in the center of the Nainital town. It is only a km away from the Tallital Bus stand which is Nainital’s government bus stand. The closest railway station is Kathgodam Railway station which is 25km away.

If you have flown to the Pantnagar airport from your home, then you will have to make a little road trip via NH 109 and travel for about 58 km to reach the Naini Lake.

Private taxis and travelers are also available from the bus stand and Railway Station to reach the lake.

Things to keep in mind